Back to all posts

My mind took a few moments to process this and for a while I thought perhaps it was hoax but a quick look on other news and social platforms proved the news was real. I rang a friend who I knew was a fan of his to see if she'd heard the news, she confirmed and said she'd been crying for the last few hours about it.

Wow! What an unexpected shock. Obviously Chadwick had kept his battle with cancer well hidden from the public eye all these years as there was genuine shock from all corners. That brought another level of respect for him in my mind and I guess for so many that even while he was fighting an almighty battle to be free of this horrible disease, he continued working hard at his job, he didn't make a song and dance his health condition, he just kept moving forward and tried to make the most of his life until at last......it was all over.

The tributes from all corners of the world where amazing to read, watch and hear about. Lewis Hamilton dedicated his F1 race that day to honour Chadwick's memory. I particularly enjoyed a short clip that was going around on Twitter which was from a few years ago showing little kids dancing and celebrating in their classroom when the Black Panther movie came out. It was such a heart warming story and so were many others about Chadwick the man, his influence through movies and so on - until I saw the viral news thread about how Denzel Washington was the secret benefactor behind Chadwick's theatre school course in Oxford. 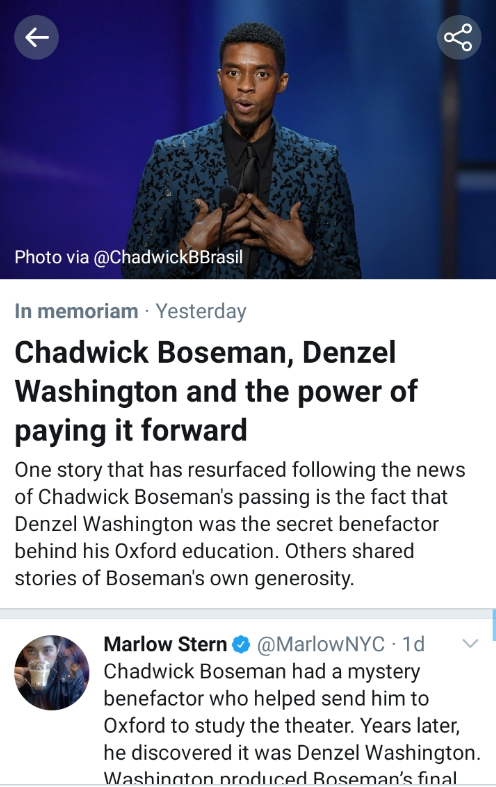 I watched the video attached to one of the viral tweets where it showed Chadwick on stage thanking Denzel for his generosity and how it obviously made a significant impact on his life. It was truly moving and I had tears in my eyes thinking what a beautiful story it was, but hours later this news article was still trending and then it got me thinking........

This actually didn't seem like the right time or place for a story like this to take centre stage. Yes it's amazing Denzel did what he did. Yes possibly because Chadwick was able to attend the course paid for by Denzel that this set off his acting career on an upward trajectory. Yes it's amazing that Denzel did this act of kindness without Chadwick or the students being aware at the time - and Yes I love Denzel Washington. But, I couldn't help wonder who thought it was a great idea to bring up this story and let it take centre stage in a moment when the full focus should've been 100% on Chadwick and HIS legacy, HIS generosity, HIS accomplishments. The story that was trending more than the news that Chadwick himself had just passed was the story of Denzel paying for Chadwick's school tuition. Errr how does this make sense under the circumstances?

I'm sure whoever started the viral thread meant well but how it became the news in place of the actual news of the person we lost (Chadwick), left me puzzled as the Saturday wore on. Knowing how private a person Denzel is traditionally, I wonder if he himself cringed when he saw that his act of generosity was trending online that day. Any other day would've been okay but something about this day when a hero to many had just fallen didn't seem like the appropriate day.

I know at the moment everyone may prefer to hear good news stories seeing this has been a crazy year, but out of respect for the dead, let their moment be THEIR moment.

Okay, okay fine, may be it's me. May be I'm a little too sensitive. Maybe I'm making a mountain out of a molehill. Maybe. However I do think there's a right time and place for everything so waking up the next morning to still see the same thread trending on my Twitter feed forced me to write about it to let off some steam and to find out if any one thinks the same or may be they can help me see this in a different light!